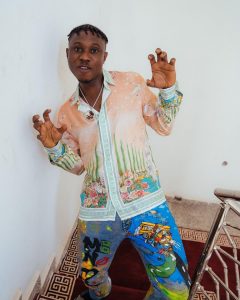 In 2014, he won the Airtel-sponsored One Mic talent show held in Abeokuta, Ogun State. Towards the end of 2018, Zlatan released a single titled “Zanku”, with a new dance routine of the same name. On 3 November 2019, he released his debut studio album Zanku, an acronym for Zlatan Abeg No Kill Us.

Omoniyi Temidayo Raphael was born and raised in Ilorin, but has family roots in Ekiti State. In 2011, he graduated with a national diploma in business administration from Moshood Abiola Polytechnic. Zlatan decided to pursue a career in music after graduating secondary school. When he was 19 years old, he won the Airtel-sponsored “One Mic Campus Tour” music competition, which was held in Abeokuta, Ogun State. He gained recognition in the Nigerian music industry after releasing the Olamide-assisted track “My Body” in 2017.

Zlatan gained further exposure following his collaboration with Chinko Ekun and Lil Kesh on the 2018 hit single “Able God”. Shortly afterwards, he dropped “Zanku”, a song that was accompanied by a dance routine of the same name. Towards the end of 2018, Zlatan released the Davido-assisted track “Osanle”. In early 2019, he released “Glory” before being featured on Burna Boy’s “Killin Dem”, a track from the latter’s fourth studio album African Giant. Shortly afterwards, he was featured on Ceeza Milli’s “Flenjo” and Naira Marley’s “Am I a Yahoo Boy”. On 26 July 2019, Zlatan announced he signed an endorsement deal with Coca-Cola.

In conclusion, you can join other people in the conversation about your favourite artiste.

However, he’s is a free going person, as we’ve from his relation with others.

On his tracks, we get to see another side of the singer as we see him speak the bitter truth that humans don’t like to hear.

It makes you want to have a rethink about life and change somethings about yourself.