YBNL boss and Empire artist Olamide would be releasing his 10th solo studio album in a couple of days hence he has unveiled a tracklist of songs that would be on the body of work.

The multiple award-winning artist via his Instagram story showed fans all the listed tracks on the forthcoming album.

According to what we have seen, the “UY Scuti” album would have 11 tracks including the lead single “Rock“. There would be a handful of featured artistes including Phyno, Jaywillz, Layydoe and Fave.

“UY Scuti” the album would be released this month on 18th June. 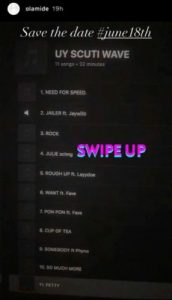